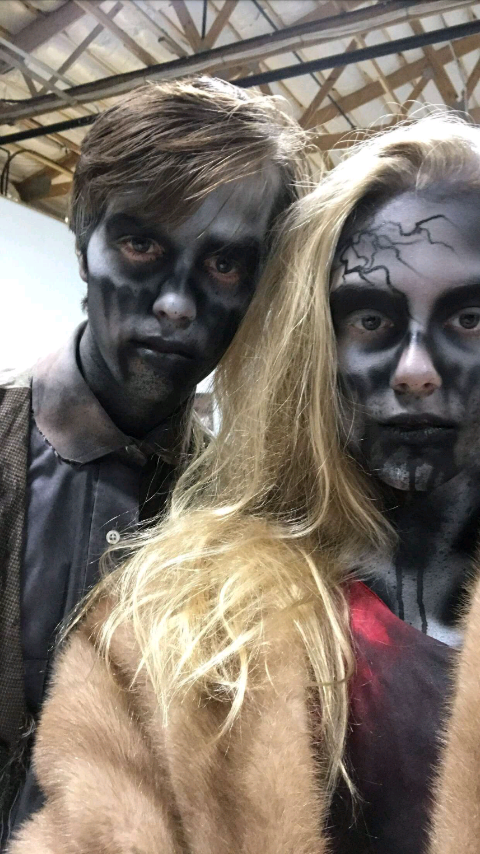 October is a month filled with fun, pranks, and of course, horror. In Will County, there are more than a dozen different haunted houses, hayrides, or pumpkin patches, many of which hire local teens who meet the requirements necessary in order to be considered fit for the job.

Hannah Nicole Meyers, an LTHS senior, currently works at the Hayride of Horror in Dellwood Park, located at IL-171 & Woods Drive in Lockport. She has been working there for three years and says, “My friends persuaded me to work at first, but I stayed with the haunt after they left because I love horror and not many people get the opportunity to work with haunts/hayrides like I do.”

Kelly Collins, an LTHS sophomore, also works at the Hayride of Horror. Kelly started the job last year when she saw flyers advertising auditions, and she decided to attend; however, the auditions don’t just include showing up. “Auditions were full of improv games and activities to show our skill with working with no script,” says Kelly.

Although the job is overall a very fun experience, Kelly also expresses her opinion on the hardest parts about the job. “Working through exhaustion and cold weather or rainy weather is one of the hardest parts,” she says, “Also [when]  working with the hayride you have to be relatively loud, so it’s not very often that you have your voice at the end of the working night.”

According to Kelly, the atmosphere at Hayride of Horror is positive, and everyone that works there is like a family. Although she is not paid for her part in the haunt, she says that teens do it for the overall experience.

Along with Hannah, an LTHS sophomore, Noah Davidson, also works at a haunted house: Hellsgate. Noah got accepted into the job by auditioning, which he says was done in small groups where the managers and owners asked about past experience and what they would bring to the haunted house if they were made an employee.

Noah is currently paid as an intern, which means he works there to gain work experience.

While guests go through a haunted house, they may notice the meticulous makeup and costumes that the actors wear. According to Noah, this is generally done by the makeup staff.

Finding jobs in the beginning of their high school career can be hard for some students, but in October teenagers can be hired by a numerous amount of different companies promoting Halloween and fall festivities.

Whether LTHS students are searching for a paid job or the community service hours needed to graduate, there are many opportunities in October.