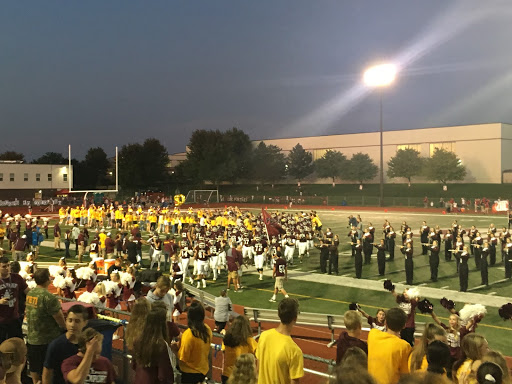 L-Town welcomes the football team as they enter the field.

The week of September 16th to 20th had many festivities that took place in honor of homecoming week. Take the traditional football game as an example. LTHS students dressed in all gold to support Childhood Cancer.

The junior varsity and varsity football teams played against Homewood-Flossmoor on September 20th, but were defeated. LTHS put up a very hard fight and the players like senior Malik Makhlouf, Number 15, announced: “We might have lost, but this gives us the chance to pay more attention to detail, and once we learn how to fix the minor ones we will be able to compete with teams like HF.”

With high spirits, the players go into their season hoping for only the best. With a nice distraction from all the sweat, the LTHS Color guard, Marching Band, Cheer, and Poms teams all performed at halftime.