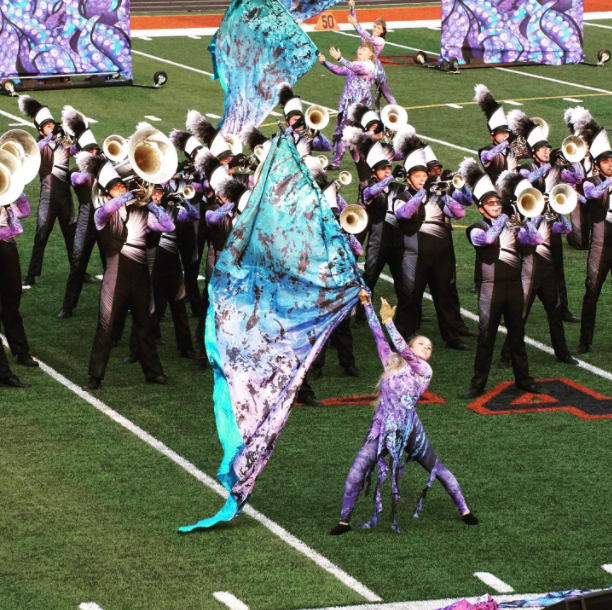 The 2021 fall season of the Marching Band was themed “Queen of the Deep”. After being out for a year because of Covid-19, the band came back with extra pizazz. With giant tentacle props and four different sea-themed show flags, Lockport is marching itself to the top. The color guard was dressed as evil sea sorceresses in purple costumes with tentacles, the vibes coming from the music and flag work were very mysterious and the show is around 8 minutes long with 3 sets.

The band’s first competition was September 11th, at Stagg Highschool. In field 2A we were up against five other schools: Andrew, Lemont, Carl Sandberg, Plainfield South, and Oak Park. Lockport placed first in that pageant with awards, music, visual, and auxiliary. This win set the mood for this year’s fall season. Then, the next two competitions were at Andrew High School and Downers Grove South. Following that, they won second place against Lincoln-Way and John Hersey High Schools. Their last pageant before ISU was the Lincoln-Way invitational. They walked away with 4th place and the best percussion award.

The Illinois State University Pageant was on October 23rd. After a long 2-hour bus ride there, the marching band performed in the prelims at 2:46 PM. After their performance, they got to watch other bands perform on the cold bleachers. The band placed 5th in Field 6A, making it into finals. Many bands all over Illinois marched in the Prequels. Still, the bands that made it to finals were Lincoln Way, Marian Catholic, Morton, John Hersey, Victor J. Andrew, Edwardsville, Prospect, Lockport Township, Lake Park, Naperville Central, Lemont, Bloomington, Romeoville, Eureka, and Providence Catholic. Everyone was stoked when they announced that Lockport had made it to the finals. Everyone was extremely cold but definitely ready to perform again. Their final performance was even better than the first. In the end Lockport placed 8th out of all 42 bands that performed that night and 8 out of the 14 that made it to finals. Lockport did amazing in this year’s Illinois State University Pageant, next year let’s reel in First Place!