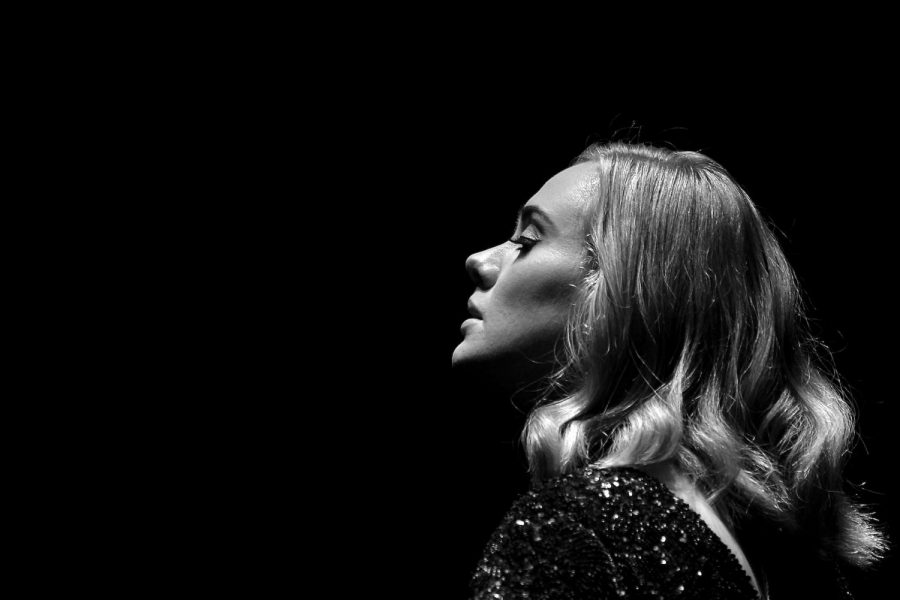 Breaking the record of most streams in a day with over 20.9 million hits, it is no secret that Adele’s new song, “Easy on Me,” is a big deal. In mid-October, the popular singer/songwriter released her new song along with the expected release date of her comeback album. The song blew up in less than 24 hours, and it makes sense considering that two of her three previous records are both a part of the top 5 best-selling albums of the 21st century. But because of her six-year break from releasing music and the significant life changes she has undergone since 2015, her fanbase and other curious spectators are left with the question of whether her new music will meet expectations or leave them disappointed.

Although her success can be partly attributed to her wide vocal range, intense lyrics, and high production, Adele’s image also plays a role in her fame. Her full face and use of darker tones like black and grey create a unique window into her life while also conveying a sense of separation from her audience in a mysterious and almost lonely way. This kind of image has been popular for centuries through the likes of Van Gogh and Mozart, and more recently, the sad, lonely-feeling has spiked in popularity with artists like Billie Eilish and Lana Del Ray.

Society’s infatuation with sad music and art will most likely continue for centuries to come, so exactly what about this art style is fascinating enough for it to remain popular throughout time? Well, an explanation for this can be found in the empathy of human beings. An experiment was done to study the correlation between those moved by sad music and empathy. In the result of the investigation, it is clear that empathetic people tend to enjoy sad music and become emotionally moved by it. Empathy is just the beginning, though. The emotions many people feel in reaction to sad music seem to parallel those felt when experiencing sorrow and pain in their own lives. This is interesting because listening to music causes these feelings without the actual real-life substance. A possible explanation of this phenomenon is that an empathetic feeling is sufficient enough to trigger the biochemical reaction one experiences after crying, feelings of pleasure, and relief. Or, it is quite possible that it just feels oddly rewarding to empathize with others.

This kind of music and art most likely stems from the artists themselves struggling with life or feeling deep, emotional pain. For many, writing and singing can become an emotional outlet that helps them through their time of suffering. This idea leads to the fizzle out of popularity and audience acceptance when they get help and lose that sadness in their music. An example of this is Billie Eilish. Billie Eilish started writing music at a young age and rose to fame due to her intense, discordant music. But as she’s aged and grown, she’s found help and gotten better which has led to her feelings changing and consequently her writing changing with it. Although many still enjoy her music, it is clear that people have connected less with it as her focus shifted from a darker, enthralling tone to subjects lacking that feeling of pain and desperation.

So, Adele. Adele’s past music can be included in this category of sad music. It invokes feelings of sorrow, regret, and pain while conveying intense passion and love. However, since her last album in 2015, she has made significant life changes that have the potential to influence her outlook on life and, through that, her music. Adele has opened up in the past about her struggle with depression and mental health issues. Many factors played into this: postpartum, unhealthy marriage, and obesity included. Her struggles with depression likely significantly influenced her writing style and the type of music she produced. But in 2020, Adele shared with the world her significant weight loss. Because losing weight can produce positive impacts like developing greater self-esteem and feeling happier and more sociable, it is likely that Adele experienced a shift in her outlook on life. This lifestyle change, coupled with her divorce, probably improved her mental health and made her a more positive person in general. Although she says she is happier and healthier, these changes will likely be seen in her music.

Due to her wild popularity and recognized talent, Adele’s audience is expecting great things from her new album, but will she be able to meet those expectations? Even though many fans may not be aware of what exactly they are expecting of her music, if her songs do not convey the same sense of pain and desperation as they did before, will people still appreciate them? Without her depression and struggles in love, is she or anyone even capable of meeting these expectations that have been set for her? The answer is probably not.

As upsetting as it is to realize that Adele’s new album will not likely showcase sad, heart-wrenching music, it is still important to take a step back from the expectations of the album and fully appreciate the music itself. Though not influenced by the same experiences, it is unlikely that Adele has lost her detailed, poetic writing style and unique ability to remain secretive and mysterious while providing a personal look into her life. So, I encourage you to listen to the album, analyze how the songs make you feel, and then take a step back and appreciate the music for what it is: a new album from a changed artist showcasing a new era of her life that she’s happier in.